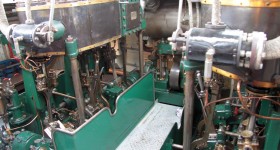 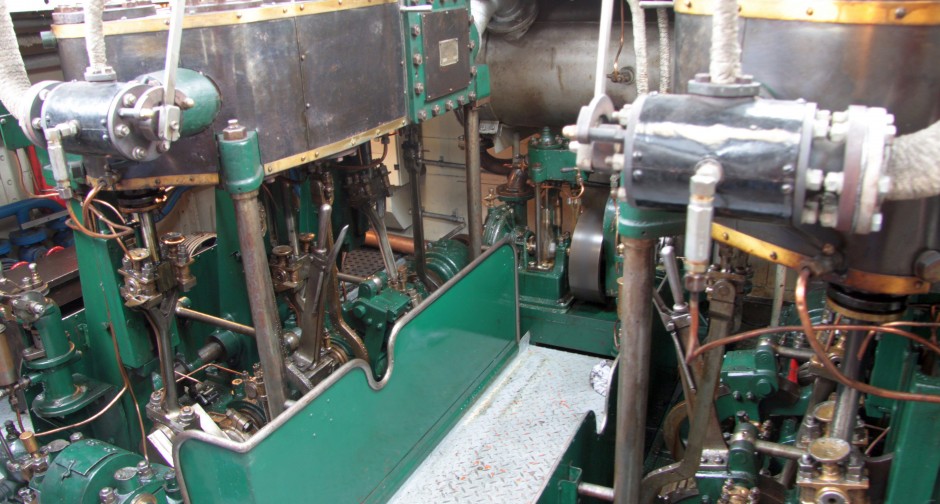 The steam engine, a product of the company Übigau in Dresden, is a three-cylinder compound engine with 55 horsepower. It is a component of the steamship „Nixe“, which traveled the Mittelland Canal and the Elbe as a tugboat and for supervision and travel. Even today, the steam engine (built in 1939) powers the „Nixe“for visitor rides in the LWL-Industrial Museum Henrichenburg Shiplift.
The marine steam engine consists of a horizontal fire-tube boiler, in which a fire burns. The heat brings the water inside to a boil and makes it evaporate. The expanding steam reaches the cylinder through a pipe. When the steam enters the cylinder from above, it presses the piston downwards. When the piston reaches the bottom, a valve blocks the upper opening and the steam can enter the bottom of the cylinder, pressing the piston back up again. This way the steam generates an up and down motion of the piston in the cylinder through the alternating pressure of steam from above and below. A rod connected to the piston drives the crankshaft. The ship's screw propeller is at the other end of the crankshaft.
On this recording one can hear the sound of the engine, especially the movement of the pistons and the ringing of the engine order telegraph. The engine order telegraph enables communication between the captain and the engineer concerning the speed of the ship. When the pointer on the dial is moved by the captain on the bridge, the pointer in the engine room moves to the same position. A bell acoustically signals any changes