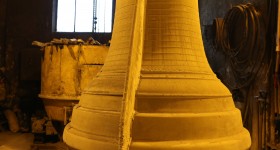 The sound of moving a metal template through the mock-up of false bell, in order to perfectly shape and smoothen the clay form. The recording was realized in Felczyńscy Bell Foundry in Taciszów (Poland).

The first stage in the production process of bells is to manufacture its clay mold. It is composed of three layers: bell's core, false bell and moil.
The core, i.e. an internal profile of the bell, is formed from clay with bare hands. After drying, it is covered with a layer of insulation mass. New layers of clay are put on such a prepared core, any cracks and gaps that arose while drying are filled in. Afterwards, the false bell is created, which is a clay mock-up of internal surface of the bell. There is a template moved throughout the surface of clay, until a perfect shape of the bell is obtained.
The false bell is covered with animal tallow, where decorations of the bell are put on, i.e. ornaments, inscriptions and images prepared from a mix of wax, paraffin and rosin. They are attached with butter. The whole thing is covered with smoothly comminuted clay - there are several layers put on, until the ornaments become invisible.

The last, thick layer of clay, a so called mantle, is put on the mold prepared in this manner. The ready mold is placed in the drying room, and dried in the temperature of 200 Celsius degrees. Wax, tallow and butter melt and flow out through the bottom of the mold. Wholes remain in the places of the melted ornaments, which are negatives of decorations, where later the metal is poured into. This is a method of lost-wax casting, already known in the Middle Ages.