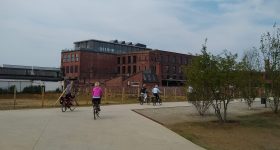 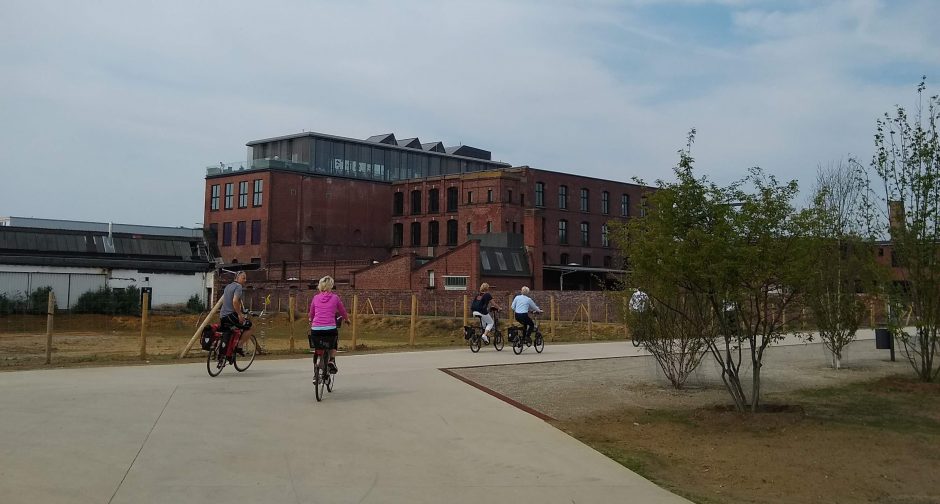 The LWL-Industriemuseum TextilWerk Bocholt is an industrial museum in the small town of Bocholt. Its thematic core is the local textile industry. The museum consists of two parts which are situated on each side of the river Aa: a historic spinning mill and a reconstructed weaving mill complete with worker’s houses and gardens. At the time of the recording the area surrounding the museum was being redeveloped as “kubaai”, Bocholt’s new cultural quarter. In a soundwalk the recordist explored the acoustic environment of the museum and the new quarter on a Sunday afternoon.

The first part of the soundwalk started in the foyer of the spinning mill, continued towards the second floor in the electric elevator. Then the recordist walked down the staircase accompanied by music from the restaurant above and the metallic clinking of the steps. In the foyer one of the museum’s employees was sewing aprons with an electric sewing machine, the clicking sounds of which can be heard. Within those open spaces of the museum the constant rush of the traffic outside is audible. When the recordist enters the “Kardensaal”, one of the exhibition spaces, the sounds of traffic disappear. The low voices of visitors can be heard instead.

Walking back into the foyer and out of the museum the sounds of traffic reappear and become louder, only to become more distant, when the recordist walks around the building towards the Aa. While inside the building the recordist's steps could be heard on flat stone and metal floors, outside there are paved sidewalks, cobble stones and gravel. Distant drums from a concert at the restaurant in the weaving mill and bicycles passing by can be heard as the walk continues towards the Aa and weaving mill. The first part of the walk stops just before the new bridge which connects both sides of the Aa. However, the music of the concert could not be recorded due to copyright issues.