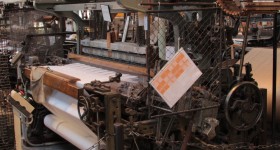 This mostly metal loom was built around 1930 and is a product of Jean Güsken GmbH, based in Dülken. The loom is equipped on both sides with a four-box shuttle changer and a shuttle driver from underneath, plus a dobby machine. Furthermore, the machine also possesses an electrical warp stop. The loom's own electrical drive enables it to be turned on and off individually. The machine still functions today, however only as a one-sided shuttle changer, by which it can weave with a maximum of 4 colors per weft pick. Also, the number of warp beams was reduced from two to one in order to weave particularly thin yarns.
The main sounds are the up and down motions of the “shafts”, the “shuttles” moving back and forth and the strike of the “beater”.