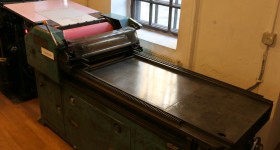 The sound of the machine for performing control copies in operation. It was manufactured by the Prasa company in Katowice (Poland) in 1967. The sound of the machine was recorded in the Printing Museum in Cieszyn (Poland).
In typographical printing, this machine was used for printing control copies from the setting cast in linotype. Thanks to such procedure, it was possible to check whether a column of text contained errors, so called printing gremlins. Typographical printing prevailed as printing technique until the end of the 1990s, when it began to be replaced by digital printing.